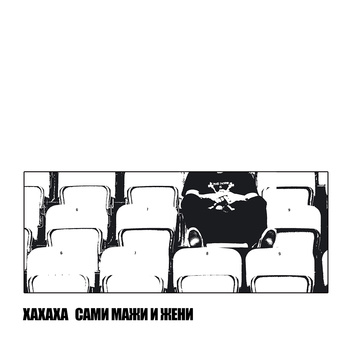 After wondering what the title of this album said and what XAXAXA might mean, I found out it’s nothing mystical or religious. It’s simply Cyrillic for “hahaha!”. That it’s Cyrillic does tell us something more about this band however, which comes from the corner of Europe we call Macedonia. Famous for, ofcourse, Alexander The Great, this ‘new’ nation has a small music scene emerging in it’s capital Skopje and these funny boys are one of the products there of.

So for those familiar with the Skopje scene, XAXAXA is not a surprising name to hear and probably one of the more prominent punkbands from the small Balkan state. Originally an offshoot of Bernays Propaganda, the band has by now established itself on its own after releasing this second album, which demonstrates a growth from their first Tango Revolucioner. Inspired by the sound of Hüsker Dü, Dag Nasty and Rites Of Spring, I concur that this band is catchy, original and rather charming on this brand new release Siromašni i Bogati.

So what do we get when we listen to this rather pleasant Macedonian punkrock band? Well, opener ‘Hrabar nov svet / Brave New World’ lets us hear some lyrics that are in Macedonian (I suppose) and come across as emotional and powerful. Fortunately the booklet offers a translation, which shows poetic and powerful lyrics that refer to the environment in an empowering way. “What do we fight for? A brave new world!”. Like any language that is not English, it gives  a special vibe to the music of the band. ‘Kolku nazad možeš da se vratiš? / How Far Back Can You Go?’ refers in a special way to Skopje, which I unfortunately can’t relate to that much. “And is Skopje really the path to death? Is Skopje really the path?”. I find it rather unnerving though hauntingly beautiful.

Musically we hear vocals that remind us of something in between Tiger Army and AFI, both very typical. ‘Siromašni i bogati / Rich and Poor’ and ‘Vtora smrt / Second Death’ both let us hear the melodic vibe and a certain darkness that these vocals add to a band that plays punkrock that is somewhere between The Get Up Kids and Rites Of Spring. Sometimes the band takes on a slightly folkpunk like vibe, like on ‘Kon svoite se vrtiš / You Turn to your Closest’, though again the vocals combined with the slow paced music might play that trick on the mind due to the simple and easyness of the music. The horns help though.

Most of the songs feel surprisingly positive and empowering, pointing out the things that matter in life right now. ‘ Probav da se isklučam / I Tried to Disconnect (Myself)’ is an exception and is truly an emotional song with a grim outlook on the ‘digitalizing’ world. ‘Sekoj raboti / Everybody Works’ brings back the positive vibe and thought provoking lyrics, though on ‘Fanariotska prikazna / Phanariotic Story’ they have lost me with the shattered, telegram style words.

Regarding the troublesome history of this region of Europe, I feel tempted to interpret ‘Ako se odbojam od bolkata / If I Detached Myself from Pain’ and ‘Ja polni zemljata so smrt / It Fills the Earth with Death’, but I feel it would spoil the magic of both songs.  There’s something about this band that makes them very likable. Who wouldn’t want to wear a t-shirt that says XAXAXA on the front? I would.