Wisdom In Chains – The Missing Links 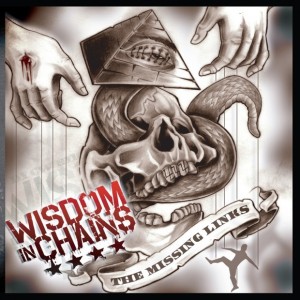 When I look at popular music I am sometimes appaled by the simple fact that the shittiest bands get the most attention. We as enlightened listeners of all things hardcore are not much better. We rather stick to the old classic bands, that worked so very hard to get were they are today, and forgive their shitty albums in a moment. Because disrespecting the pioneers is a big sin. And you know which bands I write about. And hey, these bands are part of my system too and I also love to ponder at their shows how great they were in the past.

The problem with a scene that is always looking back (come on, the real progression stopped more than ten years ago) is that you tend to forget about those bands that actually do something new and do it with the same energy and intensity as those great names. Wisdom In Chains is one of these bands. And I am glad to see that a lot of genuine hardcore fans have found their way to this band. The excellent mix of hardcore, punk and oi works in such a manner that I can use this band to introduce anyone to hardcore without the fear that they might not like it. With that said I must say that, although a lot of people checked out their previous stuff and the band gained a much larder following over the years, this band should play for sold out venues all the time. Because the band is even better live.

Now don’t expect progression in the most extreme way possible. Wisdom In Chains has managed to make an album that screams out beauty with every tone and challenges the listener more than normal. Hardcore was always has been a genre filled with instant gratification. I want it and I want it now. The Missing Links tells you something different. You like me, you want me, but you have to do much more for me before I show you how good I actually am. And to be honest, I have to be really into the mood to listen to stuff like this. Because the songs sound like anthems that speak of loyalty, friendship and commitment. In fact, the album sounds like a big party.

Lyrically it’s more than songs about brotherhood. Some songs are personal stories, others go against the system and overall this is an album has a working class vibe. It never gets tacky or cliché and although you might think you have heard some stuff before; you really haven’t. This is again proof that this is a well thought out album that actually hold more promisses for the future than ever before. For me it worked to listen to the album, let it rest for a week, and then listen to it again. After that you will understand that this is one of the better albums this year within the genre.

This all doesn’t mean that it is a perfect album. Productionwise it misses the raw impact that I hoped for. It borders on overproduced. It’s not overpolished but the next album would benefit from a rawer and somewhat messier sound. Now the spontanity comes out of the backingvocals and some moments. But overall it’s a bit too perfect. On the otherhand we enlightened hardcorefans always listened to numerous productions that were shitty to begin with. Only a nitpicker will discard the album because of something small like that.