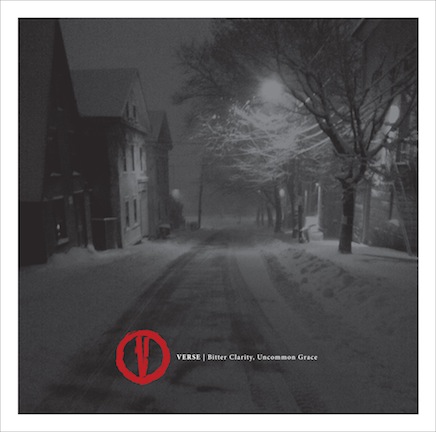 Skeptical as I was about Verse reuniting only two years after breaking up I have to admit Bitter Clarity, Uncommon Grace does sound like that record you knew the band could made but somehow never did (up until now of course).

Though I hate coining terms like ‘mature sound’ and ‘progress’ when it comes to hardcore, these actually are the words that should be applied to this Verse record. From the blistering voice of Sean Murphy to the sound of songs like ‘The Silver Spoon And The Empty Plate’, there’s so much going on on this record it makes you revisit it a lot.

Where most hardcore bands who mature end up with a shitty record (Uniform Choice, SSD to name some oldies) Verse has managed to take the anger that was aplenty on their first three records and reconstruct their whole sound on this new one. It’s like the band has used the past years two decomposed every thing they once were and carefully build layer upon layer of a new Verse using the available pieces in a whole new way.

Bitter Clarity, Uncommon Grace is dynamic in it’s sound and natural in it’s approach. Together with Hot Water Music’s Exister it’s proof that just sometimes comeback records are a worthwhile addition to the back-catalogue.