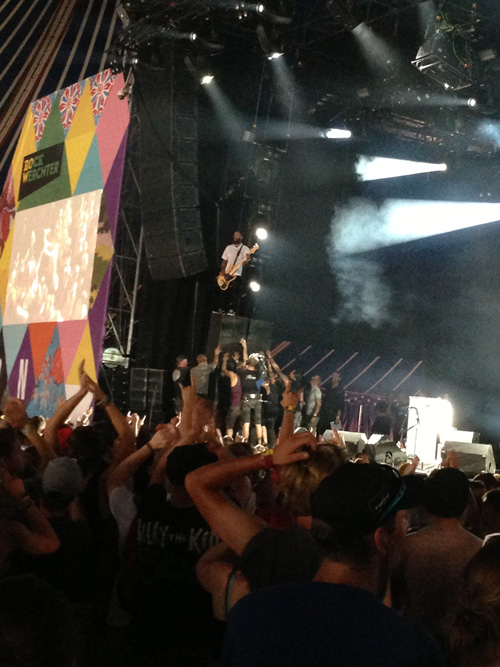 I went to Rock Werchter a couple of days ago. And I didn’t plan on writing a review. I mean, Rock Werchter isn’t really a hardcore / punk kinda thing you know. Rather the opposite. Don’t get me wrong though, I really had a blast. Great festival.

I don’t know. Trash Talk is not the kinda stuff I patiently listen to at home, so I basically never put on their records. I am always blown away by their live shows though. We played a couple of shows with them some years ago and those guys were crazy. Good guys, but batshit crazy. A good ingredient for a hardcore show.

I decided to get to the festival area early that day. I’ll confess, mainly to charge my phone. But while I was there anyway I wanted to check out Trash Talk, and made sure I was there in time. Would be a different wake up call from Charles Bradley (the big highlight of the festival if you ask me) the day before, that’s for sure, but I was really curious to see how they would hold up on a huge stage. And more specific, how they would do on a festival like Rock Werchter.

I’m glad I went. I was already cracking a smile before the show even started. Why? Singer Lee was on the stage already (putting away some bottles of water) and nobody seemed to notice him. A bit later the two guitarist walk up on the stage, pick up an instrument and people started to cheer. That’s a festival audience for you. They have no idea what’s on the stage but as soon as they think something’s happening they start making noise. Oh well, it’s actually an interesting change from the “arms-folded-across-chest-and-looking-angry” folks at most hardcore shows 😉

So the drums kick in (sounding massive!) and they start playing a nice groove. Lee walks on stage, slams a bottle of water into the tent and we’re off. Not long after that Lee hurls himself into the audience. The stage is huge and there are barriers, but it doesn’t feel like that at all. They draw you in. They quickly got some circlepit action going on (two circlepits actually, because of the barriers), Lee urged the crowd to do some fistpumping and they even got the crowd to do a sitdown (I thought that was a bit silly, but hey, it looked pretty great). There also was this moment of a guy climbing on stage, and staying there way too long. He acted like an idiot and the band just stopped playing. He then tried to get off the stage but Lee made the security stop him. He was quickly send on his way to the back of the tent, crowdsurfing. “Send him totally to the back of the tent would you please? thank you”. Another smile. More chaos followed and at the end of the show guitarist Garrett was playing his guitar in the audience, bassist Spencer climbed on top op a speaker, Lee was crowdsurfing the crowd and new drummer Thomas (ex Mars Volta) was looking cool, just beating the drums.

But they were not done with lessons from the “hardcore 101” handbook. Finishing the show they announced they would be back in a couple of minutes selling shirts on the side of the tent instead of at the usual festival merchandise spots. “Fuck all that festival shit, this is cheaper”. I don’t know if the Rock Werchter organisation was too happy with that, but it was fun to see the band and audience going outside the tent together. As one.

Where a band like Green Day had 3,5 hours to play (and still only manage to play a couple of Dookie songs…), Trash Talk had 40 minutes and finished early. They made sure every single person in that tent was awake though. They showed you can play a big fest like Rock Werchter and still keep true to those punk ideals. And I’m pretty sure they turned some new kids onto the gospel of hardcore. I might have entered that tent a bit skeptical, but that feeling was obliterated when I walked out of there.

I only took one crappy photo (ok, I took a couple more, but they’re even more crappy), but I found this YouTube video. Not that amazing either. But hey, trust me. It was cool.