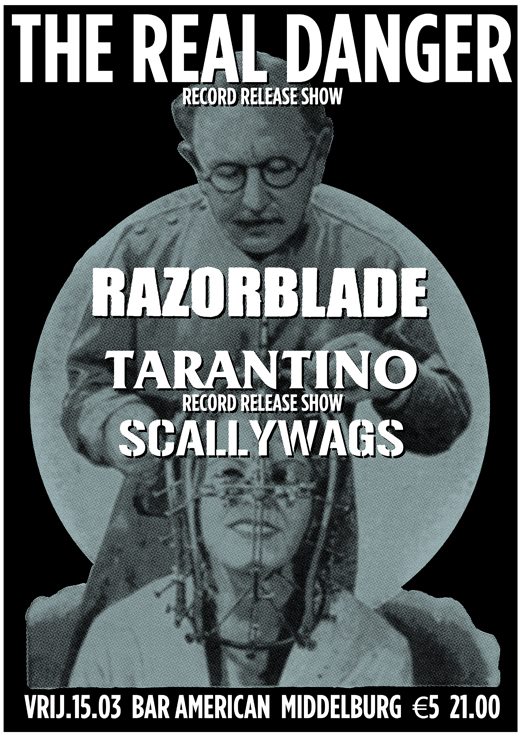 Off to a Friday night in Middelburg for what will probably the most diverse line-up of Dutch bands this year and a record release show for two of those bands to make it even more of a celebration.

Since 1995 I’ve traveled all over the Netherlands to see lots of crappy and some awesome bands spoil their guts on stage yet it still happens even now and then that I go to a show in a club I’ve never been before. Bar American in Middelburg is such a place. The only thing I knew about it was from the pics Nous makes there. And on those pics you always see a crowd go wild and having fun.

Scallywags were the warm up band of the night. These locals have probably been around for longer than the age of the average visitor of this site. And they still bring their blend of 80’s hardcore and punk with enough vigor but way more joy than most bands.

Yet it was Tarantino‘s task to really kick things off. The show featured as a release show for their record and it was my first time seeing them. And do they know how to leave an impression. Crazy and chaotic pretty much sums up their set. But for all the craziness of the guitarists and singer the band never gets too sloppy. The younger people in the audience started a good slam pit and by covering GG Allin and Negative Approach Tarantino let the older people in the audience know these youngster know their roots.

Do you know the movie This Is England? I really felt like walking on the set of that one when Razorblade started playing. At least thirty boys and girls dressed in their Fred Perry or Ben Sherman gear. Shaved heads. Doc Martins. You get the picture. It’s not often I meet a crowd like this one at the shows I attend. It sure was something different. The skins didn’t immediately go wild for Razorblade but towards the end of their set their was all the skinhead pit action and singalongs one could ask for. I myself found it rather impressive how good of a band Razorblade has become over the years.

Most of the members of The Real Danger have their roots in these parts of The Netherlands so in a way it was kind of fitting that their Dutch release show takes place in Middelburg. (To be honest it was a pure coincidence since the Dutch Antidote were originally playing this show but that band broke up and The Real Danger was asked as a replacement). Down And Out is already the third full length for what I consider one of the better punk bands in the world playing Descendents style punk rock. The band played quite some songs from the new record as well as fan favorites like ‘Cigarettes and Heartache’, ‘Cutting Ties’, ‘ Guitars’  and ‘ Rewind and Erase’. Both old and young decided to join in on the fun in a chaotic mix of dancing, singing and slamming. When the band started playing NoFX’s ‘Linoleum’ the whole place almost exploded but in all fairness every song the band played was well received.

Though the line-up did seem a bit strange it turned out to be a very good night with the some of the best bands The Netherlands has to offer at the moment. What more can one ask for on a Friday night?

Pictures by Niels Davidse. Check the rest of the set here.