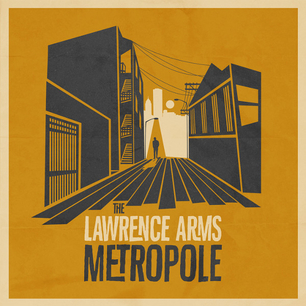 Lawrence Arms’ sixth is a weird one for me. I love the Lawrence Arms so much and have been waiting for this album for so long. When the first reviews of ‘Metropole’ popped up it scared the shit out of me. It did not get burned to the floor but it was not the response I personally expected. I expected this one as a so called “instant classic” in the punk rock scene. After two weeks listening to ‘Metropole’ on a near daily basis I can gladly say that this sure is an ”instant classic”. Everything on this record reaches to perfection. This sounds quite extreme but you have to trust me on this one.

I think the magic of this band lies within the fact that these three guys are pure friends. Which expresses in a three men punk rock band where everybody has the freedom for their input wherever they like, which explains the fucking brilliant way of varying between vocals. The wellknown raspy Brendan Kelly and the Skiba’ish (Matt) ‘Chris McCaughan’. Listen to ‘You Are Here’, this one could have been an older Alkaline Trio song. The sort of melancholic opening lyrics which soon speeds up to an uplifting beat but lyrically it stays on the downside. I think the Skiba style is written all over McCaughan but if you still need to be convinced check out ‘Beautiful Things’ and in particular the ‘…and I was so youuung’.

From Punk rock opener ‘Chilean District’ till anthemic ‘the Profiteers’ the album breathes a weird but freaking awesome atmosphere. An atmosphere which goes from nearly depressing to feelgood and from beautiful to freaking morbid. Also the fillings are just brilliant, think of a ‘New Lexicon’ (Paint it Black). In ‘Acheron River’ the intreraction between the city background and the vocals are well played. Now that I mentioned ‘Acheron River’…. What a fucking anthem! Let’s ride that fucker hooooooome!! After this definite live killer the beautiful title track ‘Metropole’ pops up. It opens awkwardly soft and melancholic (‘the Wilderness of these streeets’) but ends in a euphoric cynicism (the ending of ALL THINGS is quite cynical right?).

The one and very only point of negativity is ‘Drunk Tweets’. It just doesn’t fit in the earlier mentioned atmosphere of the album. It’s an okay song but it doesn’t fit and the guitar is less interesting. But you can forgive them so fast and so easy cause they immediately pull up with the amazing ‘the YMCA down the street of the clinic’. This song has to be THE punkrock song of the future. The interaction of morbid boring McCaughan and the choruses in combination with the cool guitar riffs is so freaking slick!

After this song the Lawrence Arms ‘ride that fucker home’ with 5 great songs but only the too simple Guns’n’Roses  reference ‘Paradise Shitty’ is a bit lame, musically also a great song though. Add all this up to the amazing artwork and we can speak of an instant punkrock classic!