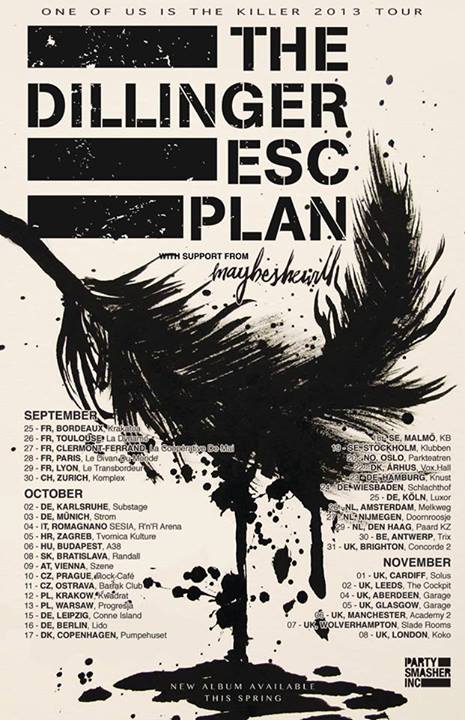 No expectations. That is the number one thing you need to get blown away on a first-timer. And at this gig I had absolutely no expectations. I sure did love that new Dillinger album, absolutely. But only from there on I checked their earlier work and now a few months later here I am standing in the Melkweg.

Steak Number Eight was quite awesome. In the back of my head I linked them to the Church of Ra somehow and in no way was I up for some heavy Amenra’ish band (great bands though but you have to be in a different mood for Amenra, Oathbreaker etc.). But these guys are, at least musically, not hugely related to that scene. Me and my pals came in when they already started and immediately I was amazed by the sludge I did not expect! Young guys who play a real slow and dense form of metal. The coolest thing of this band was that they made sort of tempo switches without speeding of slowing within the music. So at the right moment they play in a more bombastic way and the singing gets more on the frontline. At this moment it sounds like they speed up but actually it’s the same rhythm. It got a bit lengthy, but good band!

After Steak Number Eight I got a bit excited already, man did I hear some stories about mental Dillinger shows! But first things first, so Maybeshewill entered the stage. After one song I thought ‘wow let’s hope that that was just meant as an intro’ but no, every song (if we can even talk about mere songs) was the same. Endless peeling away on a guitar and a keyboard. NOT my cup of tea and I think nor for any reader of this site.

After this I even got more excited for Dillinger, because staring at the Melkweg screens became boring at a certain moment. When Dillinger was about to start they had a intro which took for ages. If they did this with a purpose to incite the audience then they did a great job, because excitement started turning in frustration ‘I HAVE TO SEE THIS BAND RIGHT F’ING NOW’. You felt this excitement throughout the people, everybody started chanting.

So, were in a stage where everybody was so excited and this video started playing. A woman who got hypnotized into a deep sleep. And when she arrived in this deep sleep the band started with, off course, the brilliant ‘Prancer’. I wonder if that woman stayed asleep… cause from this moment I never took notice of the visuals again, just because of the terrific performance of Dillinger. Wow…. Just WOW what an overdose of energy from opener ‘Prancer’ till, personal favorite, encore ‘Sunshine the Werewolf’.

The boys played so absurdly tight and energetic in a way I’ve never seen before. I’m not saying this is the best show ever or anything but they sure are leading in a professional and technical way. With a set which contains the best of all worlds they could not fail to entertain every fan, old or new. On one point it did get the tiniest bit of an automatic pilot vibe but they switched to their new material, their almost soulful ‘Nothing’s Funny’ and the majestic ‘One of us is the Killer’ to hereafter finish their show in a brutal Dillinger conclusion.

During the set there were so many folks filming or even just looking on their phones. It got me and my pals quite mad. One guy was even googling  ‘the Dillinger Escape Plan’…. WHY?! Just enjoy the show and if you got questions about this band ask them after the show and get a chat on. I thought about taking pictures of this show to put them in this review. But the combination of a lack of a quality camera and my reluctance of pulling out phones at every step a guitar player takes made me put in just one picture to symbolize these weirdos… I am convinced, via one of these billions of cameras, the whole concert will be on Youtube any moment now. So check out the videos and photos for yourself.

Don’t  get me wrong I am not a grumpy modern media hater or such but you had to see this, it messes up the feeling of checking out great music with like minded people. Anyway… on the stage they were still going mental. Guitarist Ben Weinman ran from left to right and made some freaking cool guitar actions which makes you wanna play guitar just for the tricks. And this guy had a Dre’s ‘The Chronic’ tanktop on… I want that shirt. Now. In my closet.

Their encore started with a cover of Aphex Twin ‘Come to Daddy’, and this was the moment were I could not stand back anymore. So we headed to the stage to find out that the audience was sadly quite dull. During my favorite song ‘Sunshine the Werewolf’ someone even asked me to calm down a bit…. Greg Puciato is raging ‘DESTROOOOOOOOOOYEEEEEEER’ and someone asked me to calm down…. I hung my head and walked back to watch the ending of an terrific show (at least on stage).

A terrific show it was! Brutal, structural chaotic and musically great! If you missed this one, go check them out tonight in Nijmegen, it’s worth it! (This already happened now) And I have to say that the Melkweg changed in a positive way, it grew as an cultural central in Amsterdam. Of course the Melkweg always has been in this position, but it grew even more. With three big shows at the same time it breathes a cultural positive vibe.