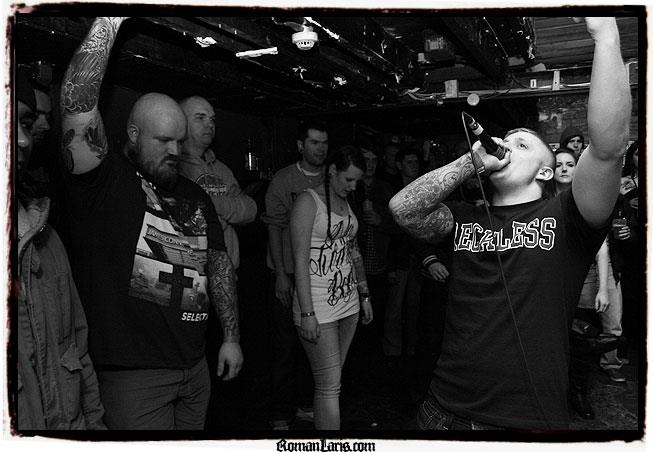 Tempers Fray hail from London, England and claim to play ‘heavy hardcore’. I’d say that is a pretty accurate description. These guys steer clear from the more Hip Hop-influenced tuff LBU-style many of their fellow Londoners are known for and instead opt for thick, grooving, end of the 90’s, early 00’s metalcore, with a bit of beatdown thrown in for good measure.

I could go into much technical detail analyzing this four track disc, but with music like this only one question is important: Does this make me want to jump up and fight the invisible ninjas hiding in my living room? The answer: OH HELL YES! As soon as singer Bob bellowed out ‘CHECKMATE!!!’ halfway through the opening track and the first breakdown hit, the dishwashing brush I was holding at the moment went flying and I was wrecking proverbial furniture in no time at all. ‘Two Faced Workplace’ has an inspired two-step beat near the end, while the second half of closing track ’15 Years’ will have kids wetting their mosh shorts in pure ecstasy. This stuff was made to be danced to!

The main band Tempers Fray reminds me of is Born From Pain in their Immortality/Reclaiming The Crown days, especially in the first and last track. Bob even sounds a bit like former BFP vocalist Ché. I saw Tempers Fray play recently in London and he told me after the show he actually hates his vocals on this demo. Bob joined the band only a few weeks before these recordings and he admitted to being pretty nervous. Live the vocals sounded more brutal, but I like them well enough here. Besides that, the production is really good for a demo. Thick, heavy and well balanced, without sounding smothered or muddy. I just keep coming back for those crunching guitars! For a band playing together for less than a year, shit is pretty damn tight.

This may not be overly original stuff and perhaps Tempers Fray could work on their song structures a bit more, but there aren’t a lot of bands around playing this style these days, so I welcome them with open arms.

Check out two songs from this demo on the band’s Facebook page right here.