Moloken – All is Left to See 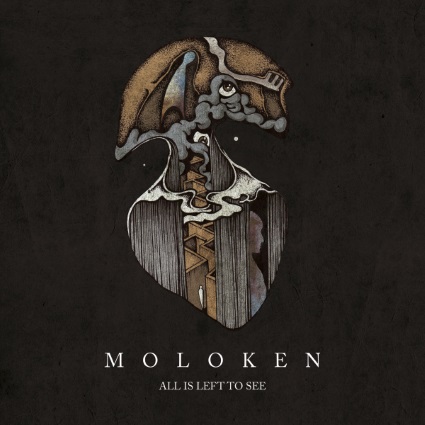 Four years in the making was ‘All is Left to See’; an album where Moloken has stepped on a new path and created much shorter songs as on previous output. Instead of eight songs in 60 minutes they do the trick in 30 minutes. Still there is the typical Swedish sound Breach and old Cult of Luna is famous for. The dark pounding sludge sound has that typical hazy blanket and the guitarists scream as if they have to endure the longest winter in years.

After the intermezzo “I can’t hear you” a blast beat enters the room in “Burst”; the crescendo is not lasting long and in “Seventh Circle” the band is returning to a depressing mode that fits the lyrical concept “Mörkrets Kärna”. It is all about falling down in a pit of your darkest being. With not much sunlight in the northern part of Sweden I can imagine your mind can be lost sometimes.

I don’t know if this album will release all the bad feelings because in “I Dig Deeper” Moloken is dwelling even deeper into dark and dissonant regions. There is not much hope to discover and I guess the band can release another album soon with all the struggles and emotions the recordings have caused. A small glance of hope can be discovered in the last tune “Beginning of the End”. Hopefully the guys are OK and will make it until they release another record or heading out on tour.

For those who still miss Breach and can’t get along with the lighter sounds of Cult of Luna I totally recommend Moloken. They have sharpened their songs to the core which makes ‘All is Left to See’ a relative easier listening session as the previous two full lengths. You can listen to I Dig Deeper.