Madball + All For Nothing + Striking Justice @ Baroeg, Rotterdam 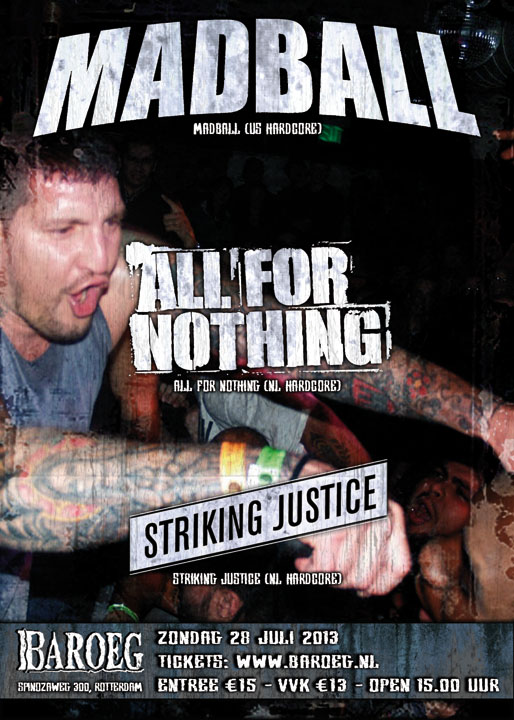 I always thought Sunday matinees were one of the best things in hardcore. What else are you going to do on a Sunday afternoon but ignore the household chores you didn’t feel like doing on Saturday, right? Might as well get yourself to a hot-as-shit venue with lot’s of smelly, sweaty people just like yourself and have some more smelly, sweaty people on stage spit some quality music in your face. I love it. It does not get any more hardcore than watching Madball on a Sunday, so fortunately, despite the nice weather outside, a lot of people did just that.

Because of some transportation mishaps on the way (that unfortunately this time I can’t fully blame the Dutch train services for), I arrived late and only saw the last two songs of Striking Justice‘s set. It’s always a surprise to see who will be in the band this time. Because of their insane work ethic and touring schedule (they just came back from a 9 show run in Indonesia, Malaysia and Thailand and are heading for Russia as I type), the band is a proverbial revolving door of members coming and going and people filling in. Somehow this never affects their tightness, because what I heard sounded awesome as always. I really don’t get why not more people are into this band.

All For Nothing‘s set started off with an apathetic audience as well, but the band’s relentless energy got the crowd going in the end. Under encouragement of singer Cindy the first moshers and stage divers of the day showed what they got, while Baroeg rapidly turned into a black, damp hardcore sauna.

I must admit I’ve never been a huge Madball fan, but ever since I first saw them perform at Dynamo Open Air 1995 (yes my dear readers, I am that old…) I’ve always enjoyed their shows. It had been a while since I saw them play a club, I was looking forward to it and they did not disappoint me at all. Neither did the crowd. No big empty horseshoe-shaped vortex up front, but people packed against the stage screaming their guts out, punks, skins, hardcorekids and metaldudes having a ball in the pit and stagedivers galore. It was fun to see the younger people going nuts to stuff from Legacy and Infiltrate The System, while the older dudes were stomping it up shirtless to the classics. And speaking of classics, with Streets of Hate and Spit On Your Grave on the setlist, there were no complaints in that department.

Video’s by Youtube user Oildale79. Check out his channel for more.

Bands: Madball, All For Nothing, Striking Justice