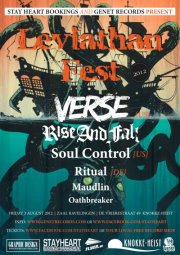 Will Verse 2.0 be able to move me as much as the band did before they broke up? How are things with Rise And Fall now the new record is out for a while? Will hundreds of Belgian hardcore kids say goodbye to Ritual? Is Soul Control really bore core nowadays. Questions that could only be answered by getting in the van and driving for two hours to one of the only proper beaches in Belgium: Knokke-Heist. I can’t say I’ve seen the beach but after six hours I got an answer to all my pressing questions.

One of the great things about Belgian shows is that if the venue is new to you, you never know what to expect. An old shed or a state of the art pop temple? Everything is possible. Unfortunately the Ravelingen venue in Knokke-Heist will never get the yet to be introduced LINTFABRIEK-award for best venue for a hardcore show. The room was too big and the stage too high for a show like this. It didn’t help that the list of attendees on Facebook out-sized the real crowd with 150 people.

Turn out was especially quiet when Oathbreaker started their set around 18.30. That’s a pretty early time for a show on friday night. The 75 people attending got to see Oathbreaker like most of them must have seen them before. Brutal music but a rather stale performance. The band seems to be a five-piece now, which was news to me, or I didn’t pay attention the last couple of times I saw the band.

Next up were Maudlin a band with already a full length under their arm but pretty unknown to me. I’m glad the organisers did give them a wildcard cause there performance was very good. In a way the remind me of a band like Anne mixed up with some Converge.  This could very well be another Belgium band that breaks waves all over the world. They sure had me convinced.

Bore Core is the name of the new Soul Control ep. To me everything this band has done since their debut Involution on Rivalry has been less and less good. Cycles was still okay but last year’s Get Out didn’t really stick with me and Bore Core even less. So I can’t say I was really siked to see them play and paid only half attention.

Germany’s Ritual are calling it quits after this tour with Verse and one last home town show. On stage this band has never failed to amaze me and there don’t seem to be slacking now things are almost over. This band is so good live it’s a shame only five to ten people actually reacted to their songs and the other 250 people stood by and watched.

I remember seeing Rise and Fall with Bane, Trapped Under Ice and some other bands in 2010 I think and I thought here was a band past their peak. Bjorn’s voice wasn’t the usual and the whole band didn’t seem to be pushing things like they used to. Then again their Faith record release show this year was one of the highlights of the year so far and the new record will probably find  a place in my best 10-list of 2012. The band opened their set in Knokke with ‘Deceiver’ and ended with ‘Faith’. Once again they proved me wrong about what I thought back in 2010. This band still manages to play their guts out and leave a lasting impression.

It was already around eleven when Verse finally hit the high stage. I wasn’t too impressed by their comeback show at Groezrock and the new songs had to grow on me. Yet Verse was one of the few bands a couple of years ago that could really inspire me by their talks in between songs and the ideas they put forward through interviews and in their lyrics. A band that I should give a fair chance in a smaller club. And I’m glad I did. Verse 2.0 seems to be a group of individuals who are happy with where they are. They’re thankful people come to check them out and they’re happy playing hardcore music. The mellow vibe I got from their set at Groezrock was still there but it didn’t bother me anymore. Like the new songs the musicians themselves seem to have changed and grown into another form that is part old Verse but a larger part something new. Here’s a band that still counts..