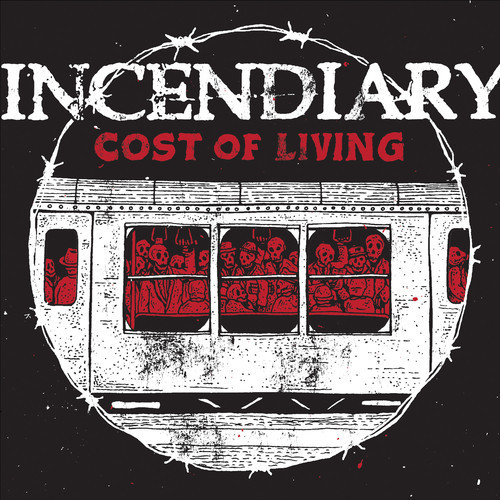 Sometimes there are records more people want to review. Like with this Incendiary record. Both Rik and Callum claimed it (and Doghead did, but he flaked out, probably too busy listening crappy metalcore). So here are not 1 but  2 reviews of “Cost Of Living”.

Remember that scene in Irréversible where Vincent Cassel pounds that other guy’s head in with a fire extinguisher? That is kind of what it feels like listening to Incendiary’s second full length album Cost of Living, and I mean that in the most positive way. I throw the word ‘heavy’ around in my reviews a lot (basicly because my English vocabulairy lacks a netter word for things that are…well…heavy), but the sound on this record is the definitive superlative of heavy. Without sounding overly metal or ‘brutal’ or using ultra low tuning, Incendiary makes listening to their mid to low tempo 90’s new school hardcore come across like audible blunt force trauma.

Coming off a flawless streak of 6 awesome songs spread over 3 split-7 inches and a fun Beasty Boys cover available on Bandcamp, Cost of Living starts with exactly the punch in the gut I expect from this band. The opening riff of groovy juggernaut Zeitgeist immediately sets the tone, followed by Primitive Rage, my favorite on this record. That breakdown…oh man that breakdown…if that shit won’t get you to mosh it up, I don’t know what will. Incendiary still incorperates the best of bands like Strife and Indecision into their music, this time with a lot more squeeky Snapcase-riffing and a bit less All Out War. A relentless groove throughout the entire album only adds to the heaviness.

However, philosophically speaking, a person will eventually even get used to being hit in the face with a fire extinguisher. There are hardly any up tempo parts on this record and this takes away a bit from the overall impact. A good breakdown in my book is 90% build-up of anticipation. Most of these songs are basicly all breakdown without build-up, which makes my mind wonder from time to time. Personally, I would have liked to hear some faster parts, also because Brendan Garone’s yelling vocal style and somewhat simplistic lyrical structures don’t always gel too well with the music when it goes really slow. That being said, nobody I’ve spoken to about this record so far seems to experience this ‘problem’, so maybe it’s just me.

If groovy 90’s hardcore is your thing, this will probably be your record of the year. For me, it just lacks a little bit of the epic feel songs like Victory In Defeat and Head in Check had.

Those of you who have been following the output on SWNK for a couple of years now, will know that, despite my obscenely narrow minded music taste, I always try and remain objective with my reviews, in the interests of making sure every band receives a fair and balanced opinion of their work. Personally, I find it a little irritating when it’s obvious the reviewer has not actually reviewed the record in question, focusing instead on their personal opinions of the record or band, be they good or bad. I would much rather present the reader with factual statements, along with a hint of opinion, and allow them to come to their own decision, than a deluge of un-qualified praise or reproach. Even if I really don’t like the album in question, I think it’s important to try and pull some positive aspects from it, so that my review reads as a reasoned and rational analysis.

Bearing this in mind then, you should know I don’t make the following statement lightly. Cost Of Living is the best hardcore record I’ve heard in the last few years. I’m quite sure many people reading this will be aware of Long Island, New York’s Incendiary already, as they have steadily carved themselves a reputation in, first the east coast US, then worldwide hardcore scene, putting out several splits and doing a lot of touring over the last few years. For the uninitiated, Incendiary play a lumbering metallic form of heavy hardcore, reminiscent of those few years in the late 90’s when metalcore was an emerging genre played by militant straight edge dudes, not the early 00’s when those same guys had started wearing makeup and decreasing the size of their garments.

Cost Of Living opens with a track titled ‘Zeitgeist’, which accurately surmises the lyrical focus of the record, dealing as it does with subjects such as government tyranny, police brutality, and the effect of technological advancement on human society. Singer Brendan’s vocals are delivered in an aggressive shout, a little clearer than previous efforts from the band, and refreshingly aggravated in comparison to the screaming vocal style utilised by many other bands of a similar genre. The riffs are heavyweight, sounding like they could be from an All Out War, or even an early Snapcase record, and never really breaking away from the pace Incendiary have already established for themselves. Fans of the band will already know of their talent for writing grin-inducing breakdowns, and Cost Of Living is no exception, smashing the listener with impossibly heavy breaks in tracks such as ‘Power Process’ and ‘Erase Myself’. Often, it’s easy to dismiss ‘mosh’ bands as the ‘lowest common denominator’, guilty of unimaginative song writing, but it would be impossible for me to overstate how far away this pre-conception is from Cost Of Living. This record is born of years of involvement in the hardcore scene, and the progression evident in the band’s song writing abilities across their back-catalogue sets them apart from the many bands now worshipping at the altar of 90’s influence. It’s also worth noting, I think, that the physical product of this record, via Closed Casket Activities, looks fantastic, and sounds even that little bit better on its intended format, vinyl. In the spirit of my introduction, I would say Cost Of Living isn’t initially as accessible as some of the bands previous efforts, although I’d attribute this to the aforementioned improvement in song writing and complexity of riff structures, as after a few days of listening, I felt like I already knew this record from start to finish. The only other real criticism I could level at this record (which in fact, isn’t a criticism at all) is that it simply isn’t long enough. Despite clocking in just short of the half an hour mark, the feedback at the end of final track ‘Silence Is A Sentence’ leaves the listener expecting/wanting another imminent assault on their eardrums, which unfortunately doesn’t come. Having said this, Incendiary is definitely one of the more active and hard working bands at the forefront of the scene right now, having put out this record and 3 splits over the last couple of years since their debut full length, so I don’t think those of you wanting more will have to wait very long.

Minor criticisms aside, Cost Of Living is easily one of the best hardcore records of recent years, in my opinion, and if you’re a fan of hardcore verging on the darker, metallic side, you’d be well advised to check it out. In my 7 years of booking touring bands, Incendiary are also one of the nicest bunch of people I’ve had the pleasure of working with, so I really can’t say enough about Cost Of Living. If you don’t like it, your ears are broken.