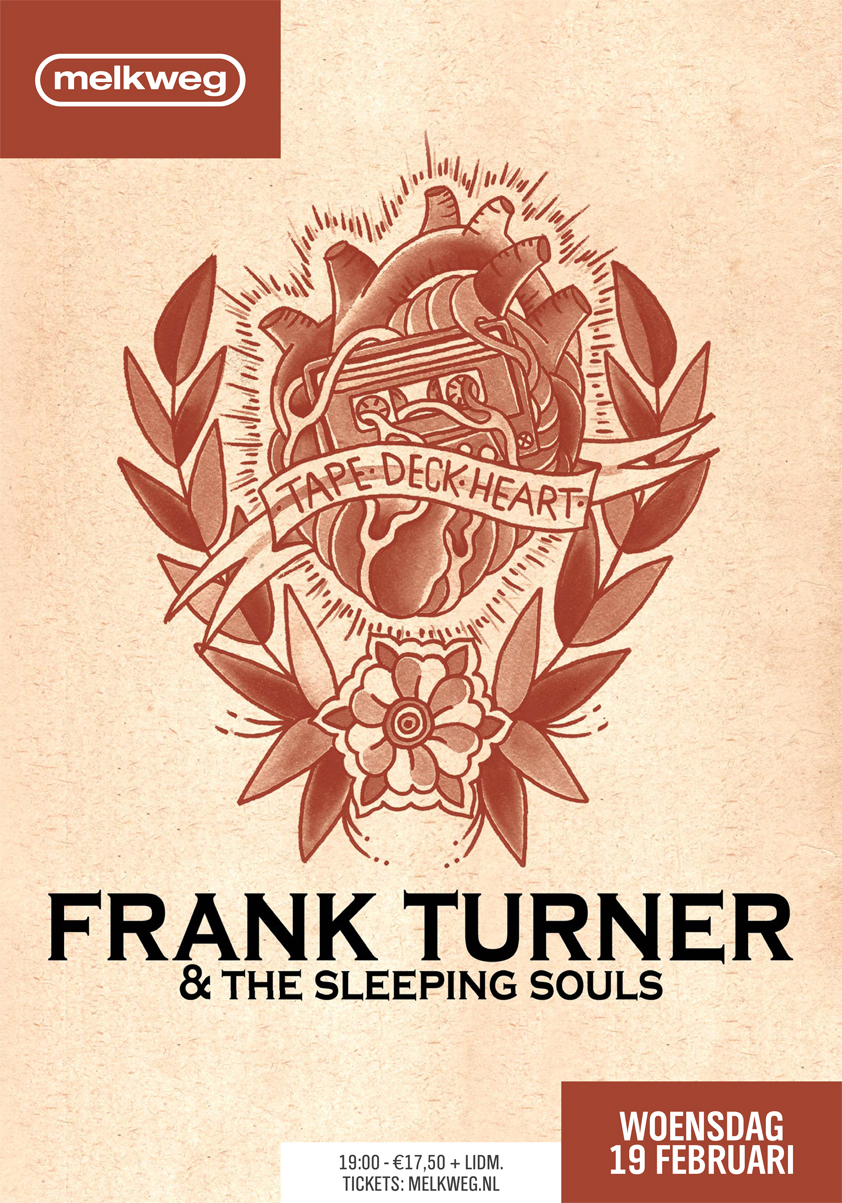 Sadly I was too late to catch anything of Ducking Punches. Sadly because I can recommend this band to everybody, especially the split with Curves and Nerves is awesome. But I am sure I will get more chances to see this great band.

Next up was the legendary Andrew Jackson Jihad. You have to love this guy. The super optimistic charisma combined with the extremely cynical lyrics is so powerful. The sound of these Jihadists is fantastic, although the keyboardist does not add anything to the sound. The band sounded way better when that same guy picked up a guitar and played the last two songs along. They end their set with the brilliant ‘People 2: the Reckoning’, the famous Mrs. Robinson ending:  “In fucking fact, Mrs. Robinson. The world won’t care whether you live or die, live or die.”

Then Frank welcomes us to his 1532th gig. The 23rd within the Dutch borders, of which I missed 5 or so. Yes I’ve seen Frank a lot, but it never gets boring. The last time was in Utrecht but I had to leave after three songs so I reckon this was my first Tape Deck Heart show. And right on time cause after this tour they start their work on a new record, which of course is considered as terrific news.

Speaking of Tape Deck Heart, I had some startup problems with this record. I can’t say what it was but it landed a bit late. But when it landed it landed good! The album is now high in my Turner end list. This pays off in his live shows, cause when the first Tape Deck Heart song on this evening kicks in I notice the success it has on the audience and on me to be more specific. Also this is the very moment where the annoying people behind me start complaining that I have to stand still etc. Aww.. Fuck me….

The setlist continues with a variety of songs of every record. Sadly no ‘Sleep is for the week’ songs, I still long for the day I’ll see Frank play ‘Worse things happen at sea’ (Please Frank…read this review). Sure I know that ‘the Ballad of me and my Friends’ always will be played, thank fuck. But still my only complaint is the lack of these older but no less classics!

I heard the rumors about the translated ‘Eulogy’ versions. I don’t care whether Frank hired someone to find out who the Dutch Freddie Mercury could be or that he actually heard of our Herman Brood himself and I don’t care if you reckon it’s kind of cliché it just works! ‘Grafrede’ is a highlight of the evening. After this Frank silences the audience with a solo version of ‘I am Disappeared’. It is only too big of an anthem to be completely silenced, so you can hear people softly whispering lyrics.

In the meantime the quite obese tit behind me is cleaning her spilled drink on my t-shirt… I don’t want to be the old punk rock nagger and I off course encourage everybody who wants to check out Frank but it is no Norah Jones so if you’re scared of some dancing feet just stay away…PLEASE. This is the right time to move a bit to the ‘Pit’, if I want my shirt to be covered in beer I have a better idea. All though the ‘pit’ is weak it’s fun, it’s the epicenter of the anthemic singing along.

At one point we reach ‘Polaroid Picture’. I love this song but I didn’t expect it to be a live killer. How I was wrong! This song is one of the highlights. The contrast between the silent verses and the bombastic choruses is overwhelming and superb! After this we head on to the magnificent ‘the Road’ and further on the encore with the one & never skipped ‘Sleep is for the Week’ song. It still shivers me, fucking love this song!

The last two songs Frank gets joined by Cahir O’Doherty, also known as the autocue during ‘Eulogy/Grafrede’. Cahir is a member of Fighting with Wire and Jetplane Landing. Me and Google just can’t figure why he was at this gig but he played some great tunes with the Souls!

As always a brilliant performance, the enthousiasm & energy Frank has is almost absurd. I know we can’t go back to those shows when we we’re just approx 50 punk rock fans singing along drinking pints. That’ll be the sweet and long gone memories, but we can’t not enjoy these terrific Springsteenesque shows, as long as the pints can stay.