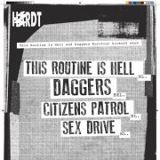 The Dynamo youth centre in Eindhoven is a pretty active place where mostly volunteers set up shows and other things for the local youth and other interested folks. They’ve been doing this for years and hardcore has always been a part of their program.

Those who say hardcore is dead in the Netherlands should have come out to this show with some of the fastest and best current Dutch hardcore bands around. Though Sex Drive are still newcomers compared to the other bands on the bill, they’ve progressed quite a lot since their first show on R’R Fest two years ago. With a 7″ out for some time now and a split with Belgium’s VVOUNDS released the day after this show the band has diversed their sound. One of the newer songs appeals a lot to me as it is one of the most intense, slow and dark songs I’ve heard in quite a while. Frontman JZ was raging on stage as usual and drummer Daan is keeping up the pace without forgetting to hit those toms more and more.

Daggers from Belgium were up next. I’ve seen this band often the past years and somehow they never truly won me over. They’re good musicians but tend to do way too long instrumental, slow parts where the band is best when they’re playing fast and chaotic stuff.

Apparently This Routine Is Hell doesn’t need their, as of yet to be released, record to tear the house down. Singalongs and crowd movement made for a great set in which the band took songs from their past releases as well as two new songs (including the awesome Asleep).  Noam is one of the few vocalists around who still tries to stir people attending the show into thinking beyond being there for the social event, which is a good thing if one should ask me. If the new songs played tonight are any indication of the material on the new record I will keep a top five spot open on my list of favorite releases of 2013.

Looking for a band that plays fast and energetic hardcore? A band that oozes 80’s hardcore without all the bullshit? Look no further, they’re living in The Netherlands and are called Citizens Patrol. After years of being a band these guys are always good for a set of songs full of speed and hooks.

Though Dutch hardcore might not be having its glory days, it are shows like these that once again confirm to me this scene isn’t over yet.