Born From Pain – The New Future 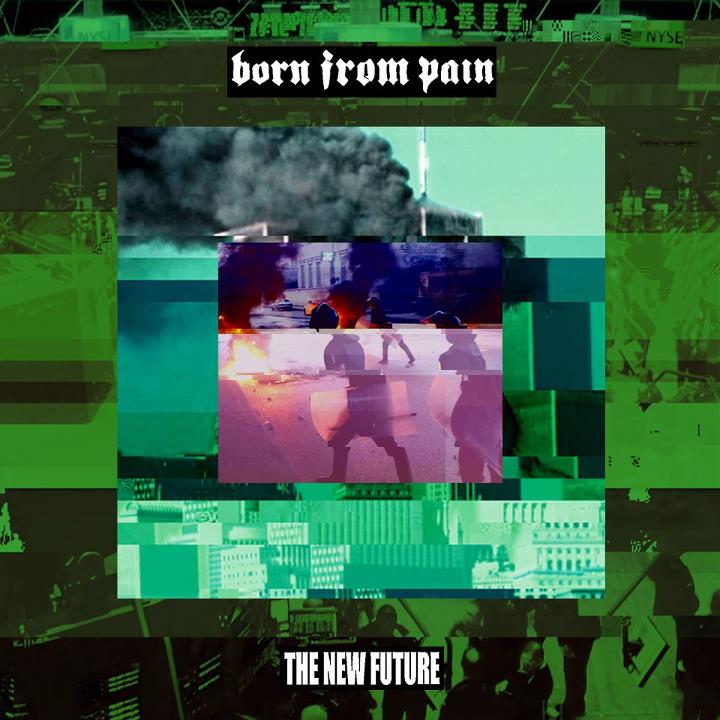 Here at SWNK we regularly get sent a tonne of emails and packages from bands and labels worldwide asking us to check out music along with all the polished music industry garbage that comes with these emails. The sheer mass of this means we can’t write about everything we get submitted, and thankfully I’m not on the frontline of channeling this into the streamlined content you see here, but when it comes to picking which records I listen to for review, there’s only so many times you can read stuff like ‘psychedelic funk metal’ before you start to just filter it as bullshit. That being said, there are still certain names on the list of potential reviews that stand out; a slew of new records from veteran euro label GSR records caught my eye, Born From Pain’s ‘The New Future’ in particular. Being one of only a couple of bands on our review list at the minute I knew much about, I figured I’d give it a try.

Born From Pain have been around in the European metalcore scene for the best part of 2 decades now, and I’ve seen them live several times at mainland festivals and supporting bands like Terror and Walls Of Jericho over here, and listened to a couple of their full length records in passing, so I figured their breakdown lead style of chugging metalcore would remain unchanged still on ‘The New Future’. Despite the title, first track ‘Change Or Die’ seems to confirm my assumptions, being 2 minutes of charging riffs with a chunky breakdown in the middle, followed by a nice solo. So far very much to form for Born From Pain, and the next 3 tracks proceed to bludgeon your ears in a similar fashion. There’s plenty of crushing riffs that fans of bands like Merauder and such will enjoy and so far I’d say I’m enjoying it. Reading a press release for ‘The New Future’, there’s mention of global social and political issues that I can certainly identify with, although I feel like the vocalist doesn’t always get it across too well in the music. One track makes a sort of vague reference to burning down the English houses of parliament for example and another some comparisons between the current state of Western democracy and the Third Reich, but on the whole I found it quite difficult to see it as the rebellion record the biography described it as. Prior to listening to this record, I wondered if the band would have reached that seemingly inevitable point in the existence of all long spanning heavy outfits where they can either choose to remain within the genre constraints that spawned them, or branch out into pastures new. The first half of ‘The New Future’ seemed to confirm Born From Pain were sticking with their tried and tested method, but just when I’d almost decided it wasn’t coming, ‘The New Future’ changes direction in the most unexpected way.

Given the bands long history, maybe I could have foreseen them pad out the second half of the album with some filler tracks, or an ill-advised attempt at clean singing, but the presence of synthesized electronic effects on the second half of the album really surprised me. A bit of further digging reveals that BFP have no permanent drummer these days, and have chosen to stick with electronic drums for recording instead, throwing a handful of other effects into the mix for good measure. So unexpecting was I, in fact, that I actually had to stop the album a couple of times to make sure this new sound wasn’t coming from some internet pop up advert or something. The chugging angular metalcore is still present for the majority, but on this second half of the album it’s tempered by strange synth melodies that wouldn’t sound out of place in a 90’s euro pop/trance setting. The harsh vocals are still present though and the whole thing ends up sounding something not dissimilar to a lot of long forgotten nu-metal bands. Okay so you had a shot at something a bit different which is cool I suppose, but I’m firmly an analogue no frills hardcore kinda guy, so all the electronic stuff misses the mark for me. I don’t think Born From Pain are necessarily trying to follow any trends with this new dimension to their music, but ‘if it ain’t broke, don’t fix it.’

My overall feeling from ‘The New Future’ is slightly soured by all these new elements, although I guess they definitely make the band stand out from the crowd. I know the band are quite popular on the mainland, so maybe their fans over there will lap up this new incarnation of Born From Pain, but I don’t think it will translate to well to kids in the UK and America. The first couple of metallic songs are alright though, so it keeps me from scoring it too low. Check the record out if you’re into heavy hardcore or the more strange elements of nu-metal.