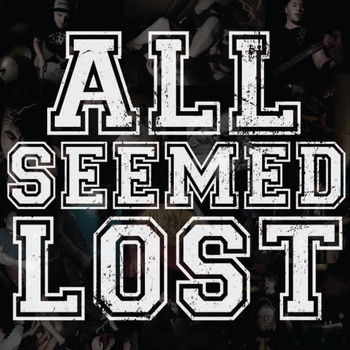 The longer you are into hardcore the more you tend to forget that initial enthusiasm you had. While I don’t want to come of like an old-aged, grumpy guy I do have to admit ‘back in the days’ I was much more overwhelmed by new bands than nowadays. It’s logic, yet it’s also a problem. Who am I to merit the impact of  a new band on people who are also new into the hardcore scene?

Why I trouble you all with the fundamental questions which are as hard to answer? Well because I took it upon me to review  All Seemed Lost‘s/t demo. All Seemed Lost are a new band from Goes, The Netherlands. And I could write here that they do nothing I haven’t heard before. That the bandlogo and songtitles are far from original. And so on.

Or I could say that All Seemed Lost are the band that made me relisten to Madball’s Set It Off for the first time in well over ten years. When Set It Off was initially released I was overwhelmed by the aggression and the riffs. Freddy’s voice was so fuckin hard. For the life of me I couldn’t think of any other band that sounded as hard and tough as Madball. (It was one of the first proper hardcore records I bought myself.)

All Seemed Lost aren’t Madball. They’re from small town Goes and not from big city New York. Still their demo reminds me a lot of what I think is Madball’s best record. Especially vocalist Jeroen has that same hoarse voice Freddy had. Musically the band taps into the same New York Hardcore sound. Yet on Until The End they incorporate some modern melodic hardcore which reminds me of Modern Life Is War. Break It uses some Biohazard grooves and On Your Side goes into the direction of metalcore.

There’s nothing really groundshaking in what All Seemed Lost do. And this record deals with some problems most first records deal with, most importantly the band going from one style within hardcore to the other. Still the core of All Seemed Lost being straight up New York Hardcore seems to be a well chosen one.

If I was a kid new to the hardcore scene and this record would be one of the first things I heard, I without a doubt would be bopping my head to these tunes the whole week in anticipation of when I could see this band live and mosh.