We Are The Troops – 9 band collaboration project from The Artillery 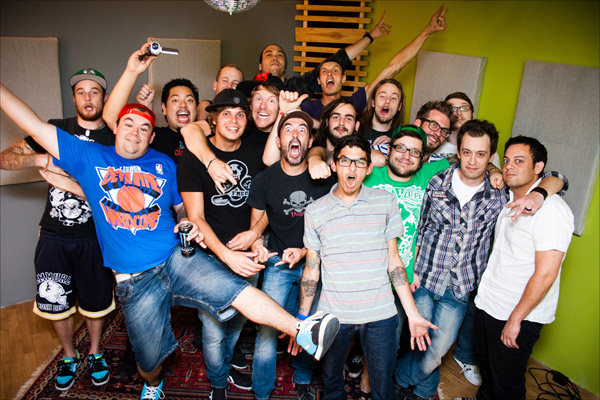 On the 9th of December engineer/producer duo Marloes Polman and Robert Nabbe from The Artillery, recording studio situated in Didam, are throwing a CD release party in Arnhem’s Willemeen. This release party is to finalize their vast ‘We Are The Troops’ (WATT) project; 7 of 9 bands participating will be playing live.

The WATT project in its essence is a split-CD between 9 bands within the alternative genres (hardcore/metal/screamo) of the Dutch music scene. The main goal of this project is for the bands to create exposure for one another by making this split CD available during their shows.

Criteria for selection was heart, ambition and talent. A balance was tried to uphold between unknown bands and other (semi-)big names. All 9 bands have recorded an EP with The Artillery, from which one song was taken and put on the split CD. Finally 2 covers songs were added (Black Flag’s ‘Rise Above’ and Bane’s ‘Can We Start Again’) on which all 9 bands have worked together, to solidify the collective and to finalize the CD. The plan was to have bands that might or might not have heard of each other work together to form a collective organically; to share ideas, to laugh and hang out and plan shows together. Despite this being a project with mainly long-term results, these particular goals were definitely met in the course of the project.

Statistics have shown that (starting-) bands often have trouble getting shows booked outside their hometown area, due to the simple fact that nobody outside this area has heard of these particular bands since the band has never touched ground here: a vicious cycle. Because all 9 bands come from different parts in The Netherlands we hope that, by having all participating bands making the CD available to the public at the bands’ individual shows, they will create exposure for one another through means of this CD.

The Artillery have tried to document this lengthy project in the form of a blog, which can be found at www.wearethetroops.com.

Not only will the release party feature live performances from 7 awesome bands (Phoenix’ Ashes, Screw Houston Start Screaming!, Rise a Thousand, Solace Within, A Jupiter Hymn, Merge as One and Captain your ship is sinking), there will also be a high-quality photo booth to get your weirdness photographed by Melvin Sam-Sin photography, of course great music and merch from all the bands and the opportunity to get your WATT copy for as little as €3! There will also be a special WATT shirt made available which combined with the CD will be €10. First 30 people at the door will receive a free copy! Expect an awesome atmosphere, great music and party decorations, what’s not to love?!

Bands that are part of the WATT project are: Phoenix’ Ashes, Asylum, Screw Houston Start Screaming!, Rise a Thousand, Never Say Never, Solace Within, A Jupiter Hymn, Merge as One and Captain your ship is sinking.