Strife’s “Witness A Rebirth” debuts at #3 in iTunes 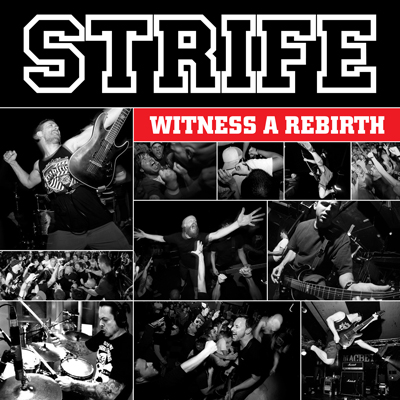 Witness A Rebirth from STRIFE was released two days ago and debuted at #3 on the iTunes Metal Chart and #162 on iTunes overall.

To continue promoting their new release, STRIFE are scheduled to appear on BBC Radio 1’s Punk Rock Show with Mike Davies this coming week, airing at midnight GMT in the UK on Wednesday 11/14 / 4pm PT in the US on Tuesday 11/13.

The show can be heard live here. And will be available for the following 7 days here.

Witness A Rebirth is the band’s first new full length in over 11 years and was produced by Nick Jett (Terror, Rotting Out, Backtrack), with mastering handled by Matt Hyde (Slayer, Hatebreed). STRIFE also recruited long-time friend and founding member of Sepultura Iggor Cavalera to perform drums for the album, plus tapped vocalists Scott Vogel (of Terror) and Billy Graziadei (of Biohazard) and guitarist Marc Rizzo (of Soulfly) to contribute to the release.

6131 Records have teamed with Vice / Noisey to offer a stream of Witness A Rebirth in entirety, available here

STRIFE have also made a music video for the lead single from the album, “Torn Apart,” which can be seen here: