Off With Their Heads release new album and stream first track 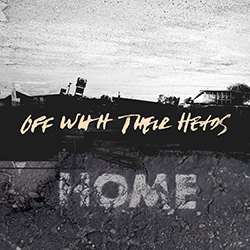 Rising punk rock band Off With Their Heads have announced plans to release Home, their sophomore Epitaph Records’ release on March 11th. The band has released the first song “Nightlife”, which can be streamed via YouTube:

Produced by Bill Stevenson of Decendents fame at the Blasting Room in Fort Collins, CO, Home retains all the boisterous spirit of the band’s earlier efforts while sonically taking a monumental step forward. The new album embraces authentic punk rock at its core and combines melodic fast paced aggression with mid-tempo pop, while singer Ryan Young’s rough and edgy vocals and genuine lyrics create a sincerity that can only come from a hard working band that lives and breathes it every day.

From the first track, “Star Walking”, an explosive opener about things getting worse while waiting for things to get better, to the album’s first single “Nightlife” about worry-filled, sleepless nights that keep you awake,

Young had the following to say about the album:

Home is about the struggles of constantly being on the move, trying to maintain relationships while being away, and not feeling like there is really anywhere to go home to anymore, it’s about the reasons why people leave their hometowns and never go back. It’s about how hard it is to accept change for some of us. It’s about getting older, and not being ok with it. It is about how religion can destroy a family. Finally, it is a dedication to anyone who can relate.

Band: Off With Their Heads